In this review, I’ll be revisiting an old friend: GOCHA Video Comment.

GOCHA Video Comment lets you add timestamped video comments to embedded videos in WordPress. If you’ve ever used SoundCloud, you might remember that SoundCloud offers a similar feature. Users can comment on a specific part of an audio file so that everyone else knows exactly what the comment is about.

GOCHA Video Comment adds that same functionality to videos that you embed in WordPress.

You may remember that I reviewed GOCHA Video Comment back in August 2016. So why the revisit? Because GochaDesign has been hard at work adding new functionality and improving the user interface.

For this review, I’ll focus on those new features. If you’re interested in a more general review of the plugin, be sure to read my previous review linked above.

What’s New in This Version of GOCHA Video Comment?

In the preceding ~five months, GochaDesign has managed to add an impressive number of features to GOCHA Video Comment.

Previously, it only supported YouTube, Vimeo, and the WordPress Media Player, so the number of video sources has effectively doubled (though Facebook Videos is definitely the most noteworthy addition).

They also made another key feature addition – you can now choose whether you want users to comment on a specific point in a video, or a time range with start and end points.

They’ve also made another change that fixes one of the major critiques I had. You can now turn timestamped comments on/off for individual videos.

GochaDesign accomplished this by adding an easy shortcode builder to the WordPress Editor. Now, you have the option to only add timestamped comments to videos added specifically via that shortcode builder.

They also fixed another minor gripe I had by moving the plugin’s settings page away from the Customizer and into a dedicated GOCHA Video Comment tab. It’s a small thing, but I think it’s more user-friendly and makes better logical sense.

And finally, GochaDesign added some back-end performance improvements, including the use of official APIs from YouTube and Vimeo.

If you read the previous review, you know that previously all you had to do was embed a video like normal and the timestamped comments interface would show up.

And you can still do that. But now you have a choice. In the new dedicated settings page, you can choose whether you want GOCHA Video Comment to work on all embedded videos, or only those added via the new shortcode builder: 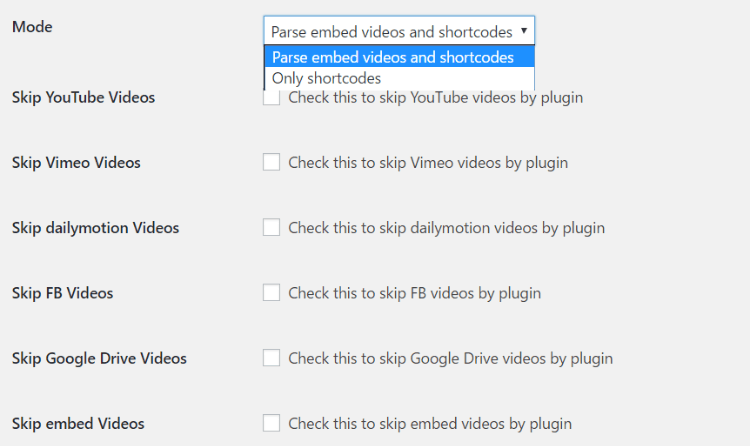 You can also tell the plugin to skip certain video types. So you could, for instance, have it automatically add timestamped comments to all videos EXCEPT for Facebook Videos.

And you can also control when timestamped comments display with another option – including/excluding specific posts/pages:

As I said, lack of control was my biggest critique of GOCHA Video Comment in my previous review. The developers have definitely fixed that issue.

While in the settings, you can also configure some of the other new features. For example, you can choose whether you want comments to be on specific points in the video or time ranges (though not both): 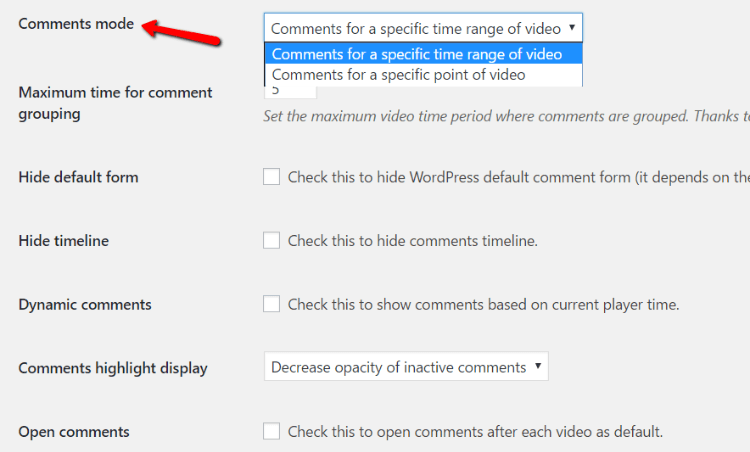 You can also configure some interface details. Again, you might remember that in my first review, there were two comment boxes:

Now, you can hide the normal WordPress comments box (if your theme allows it).

And finally, the last thing you can configure in the settings tab is your color scheme:

Clicking on it opens up a simple interface. All you really need to do is enter the URL of your video and click Insert:

But if you want to change the display settings from the defaults you set in the plugin settings, you can also configure them on an individual basis in the shortcode builder’s Comment Settings accordion tab: 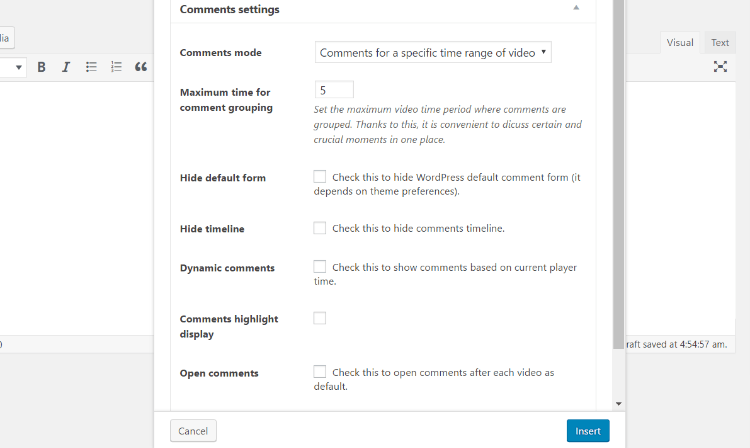 These settings are almost identical to the options in the plugin settings page. The only difference is whether or not you want to highlight comments (another new feature!).

I’ll enable comment highlighting and show you what it looks like on the front-end using the same pinata video from my first review.

Here’s how a shortcode-embedded video looks on the front-end. For this video, I’m having users comment on a specific point, rather than a time range: 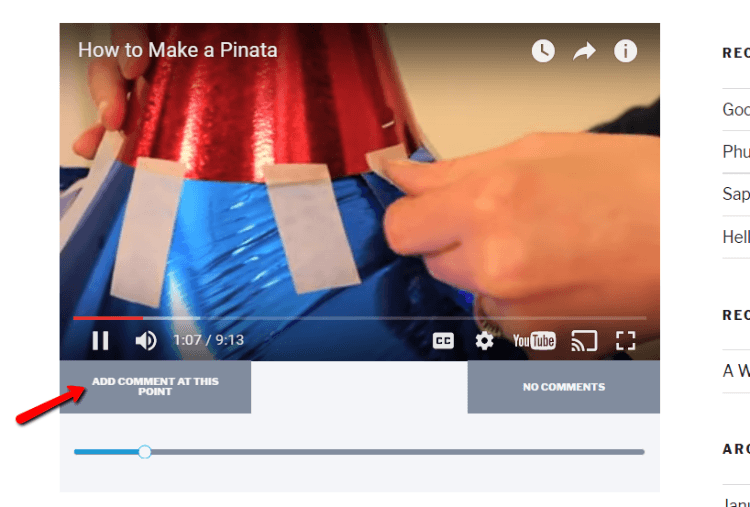 And then here’s what it looks like with some dummy comments: 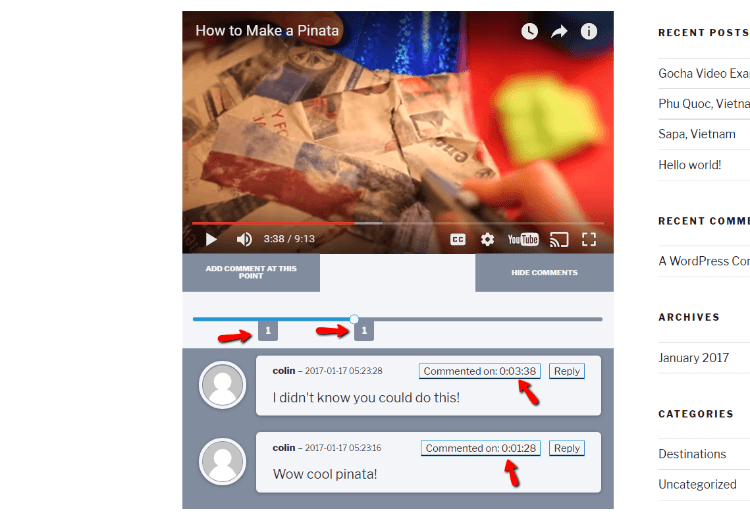 Notice the markers on the video timeline as well as the specific timestamps on each comment.

I like this feature a lot. Rather than trying to figure out each comment’s chronology by looking at the timestamp, you can do it visually by simply hovering over the comment.

To show you how embeds look like for the biggest new supported video types, here are a couple of added shots. These were all built by pasting in the video URL to the shortcode builder: 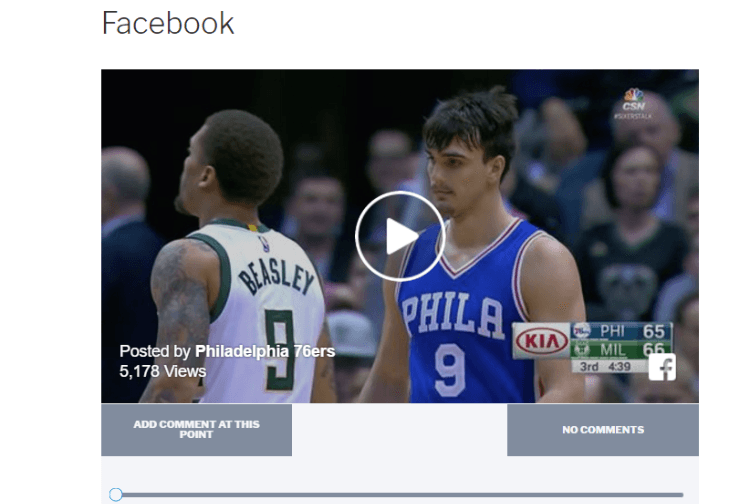 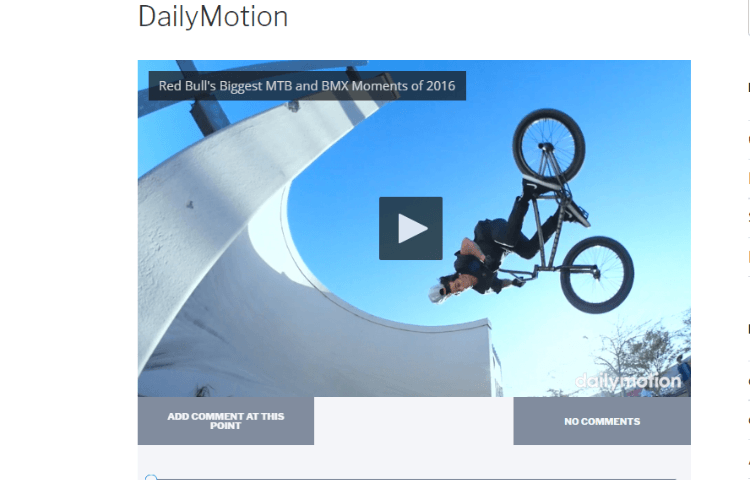 GOCHA Video Comment is currently priced at $25, which is a slight increase over the $17 price listed in my previous review. Given all the improvements, I think a small price increase was more than fair.

You can buy GOCHA Video Comment at Code Canyon.

Of course, you’ll also get support via Envato’s standard licensing.

I’m quite happy with the current iteration of GOCHA Video Comment. Everything that I critiqued in my previous review has been fixed in this version and you now have significantly more control over when and how timestamp comments display.

When you add in the fact that you can now also add comments to Facebook videos and a couple other additions, you get a significantly improved plugin. Kudos to GochaDesign.

You can buy GOCHA Video Comment at Code Canyon or go to GochaDesign’s website for demos and documentation.

Colin Newcomer is a freelance writer and long-time Internet marketer. He specializes in digital marketing, WordPress and B2B writing. He lives a life of danger, riding a scooter through the chaos of Hanoi. You can also find him on Twitter.

Does WPLift load fast for you? That’s because we use Siteground for hosting, WPLift readers can click here to get up to 60% off hosting for your site.